Kevin Pulis of the Tarr Group LLC joined ambassadors from the Greater Florence Chamber of Commerce on Tuesday to celebrate the group’s new chamber membership. A ribbon cutting was held at the chamber.

Pulis, a civil engineer who grew up in Florence and recently moved back, said he joined the chamber because he wants to be a part of the community now that he is back.

Pulis said he is eager to get back into the community and work with the Greater Florence Chamber of Commerce.

“I want to help it (Florence) grow and prosper,” he said.

He said Florence is becoming a very impressive place, especially the downtown.

The Tarr Group is a national civil engineering consulting firm with offices in Portland, Oregon; Denver; Indianapolis; and Florence.

Pulis said it is a consulting firm with experience in commercial, industrial and residential services. He said the group does site work from start to finish.

The Chamber and the South Carolina Department of Commerce would like to invite area businesses to participate in a Youth Apprenticeship Accelerator Meeting on Thursday, March 14. The gathering will be held at the SiMT Building located at 1951 Pisgah Rd in Florence. Registration starts at 7:30am and the program starts at 8:00am. The agenda includes a review of Apprenticeship Carolina and business/industry leader discussions on their active role in youth apprenticeship programs. A continental breakfast will be provided. Please RSVP as soon as possible as seating is limited. Register here online now. 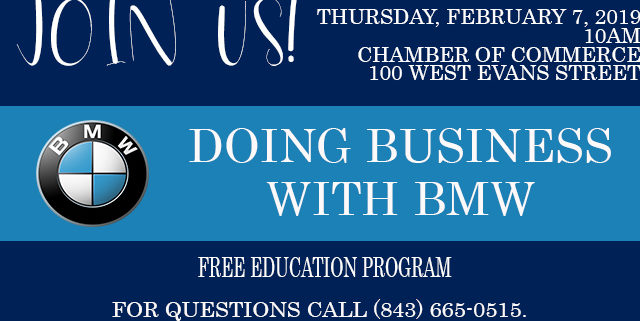 FLORENCE, S.C. – The Greater Florence Chamber of Commerce in partnership with BMW is hosting a one-hour “Doing Business with BMW” forum at 10 a.m. on Feb. 7 in the chamber office at 100 West Evans St.

Representatives from BMW will discuss upcoming opportunities for small-, veteran-, woman- and minority-owned businesses, as well as details on attending the BMW supplier diversity conference in Greenville on April 4.

“The Florence Chamber sends a group of local, small minority businesses to the BMW Conference every year, which started while building a rapport with BMW several years ago” said Les Echols, the chamber’s director of community and minority enterprise.

The Carolinas-Virginia Minority Supplier Development Council (CVMSDC) will also be on hand to discuss how it supports and promotes minority-business development.

The forum and partnerships are a part the PRISM program, a chamber initiative that was created to promote the inclusion of small and minority businesses.

Attendance for the “Doing Business with BMW” is free, but advance registration is required since seating is limited. Those interested in attending should RSVP at this link.

FLORENCE, S.C. — The Hardee Agency had a ribbon cutting Thursday to mark both its joining the Greater Florence Chamber of Commerce and its change in ownership as of Jan. 1.

Formerly Ben Stevens Allstate, the agency is now owned by Brandon Hardee and has remained with Allstate.

Hardee bought the agency from his father-in-law on Jan. 1 when he retired.

The Hardee Agency is a full-service office that offers personalized insurance, home, auto, life, counsels on retirement needs and offers some commercial coverage products, Hardee said.
“This business has been in this location for 25 years,” Hardee said. “I’m excited to continue that legacy he started so many years ago.”

FLORENCE, S.C. – Two colleagues from the Florence Center were neck and neck for the Greater Florence Chamber of Commerce Ambassador of the Year 2018 award, based on a point system. The award recipient was announced Wednesday at the annual Ambassador Luncheon, held at the chamber of commerce office in downtown Florence.
Brian Davison, director of sales, bested Patricia Taira, senior sales manager, by only 20 points to win top honors. Third place was awarded to David Fountain, who owns two UPS stores in Florence.

The award is based on points earned for participating in various chamber activities such as attending ribbon cuttings, Business After Hours and the Ambassador Luncheon, hosting an event or volunteering for a chamber event with the most points, a total of 30, earned for bringing a new paying member to the chamber. Seventy-seven new members joined the Greater Florence Chamber of Commerce in 2018, said Jay Lavrinc, director of membership relations with the Greater Florence Chamber of Commerce.

Fifteen new ambassadors joined the chamber team in 2018, said Lavrinc. Fountain was one of them. Davison and Taira joined during 2017.

Davison said he joined because it was an opportunity for the Florence Center to be seen and represented to the public, to be a brand for the center.

Lavrinc said there was a “friendly competition” among the top contenders.

“I am very, very competitive,” Davison said. “And so is Patricia. She is just as competitive as I am.”

He said the competition was all in fun.

Davison said he didn’t record his points his first year as an ambassador because he didn’t believe in points. He said Lavrinc convinced him to keep track this past year, and it paid off. The Ambassador of the Year receives a plaque and a $100 gift certificate.

Lavrinc told the ambassadors that the new year has already begun with a ribbon cutting on Tuesday and that it is time to hit the ground running.

“We have a good group of ambassadors, and we appreciate all that you do,” said Mike Miller, president of the chamber. He said a lot is happening right now in Florence that is yet to be announced. He said Hyatt Place hotel and Carolina Bank, both downtown, should be having ribbon cuttings by mid-February.

“Thanks to ArborOne Farm Credit for their generous sponsorship of today’s session at the S.C. Agribiz Expo! We learned that when agriculture and forestry are combined, they create the #1 industry in our state. We had a great time learning about livestock, farm technology, agribusiness and more!” 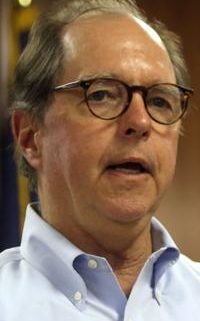 Florence City Manager Drew Griffin will be the speaker on Feb. 22 at a Greater Florence Chamber of Commerce breakfast.
This Winter Legislative Breakfast, an informational community gathering, will start at 7:45 a.m. at the Florence Center. Doors will open at 7:30 a.m. The program will close by 9 a.m.

“We get questions daily about city and county happenings,” said Mike Miller, president of the Greater Florence Chamber of Commerce. “Sometimes, we find ourselves reaching out to city or county representatives for answers.

“Lately, with all the area development and growth, we are answering so many questions it seems logical to have city leaders offer more compete details. People want to know, and this is the perfect forum to share such information. We would like to do the same with the county soon.”

A Q&A session will be held after Griffin’s presentation. Questions will be accepted at the program, or questions can be sent in advance to the chamber, which will have Griffin address them during the program. Email questions to info@flochamber.com.

Parents can apply online through the Carver Elementary website here.

Calandra Brisbone, the STEM magnet coach for Carver Elementary, said the STEAM magnet program applies project-based learning and STEAM curriculum to all areas of education. She also said the school is moving more toward a blended model for learning.

FLORENCE, S.C. – The United Way of Florence held a ribbon cutting on Tuesday celebrating its new membership with the Greater Florence Chamber of Commerce.

Interim United Way President Keven Russell said he felt it was important for the nonprofit organization to support the community that it serves.

“It is a great community of leaders, and we want to be a part of it,” he said.

The United Way of Florence partners with 17 agencies that receive funding through its annual campaign. Their goal is to raise $1.2 million. Russell said they are about 40 to 50 percent of their goal.
The funds go toward daily operations, and the United Way tries to get as much as possible into the hands of the agencies it partners with, said Rachel Baggett, director of marketing and initiatives. The United Way funds 24 programs, she said.

The United Way of Florence has a staff of four. They are Russell; Baggett; Wendy Bird, vice president of campaigns; and Farris Lupo, operations, finance and volunteer director.

Russell retired to South Carolina after 20 years with NASA and 20 years with GE. He joined the United Way Board of Directors as campaign leader before assuming the duties of president.

He said he works with great people and has the pleasure of helping people every day.

FLORENCE, S.C. – South Carolina Rep. Carl L. Anderson encouraged people Thursday evening to keep Dr. Martin Luther King Jr.’s legacy alive. And in order to do that, people must be reminded of the difference King made for all people, he said.

In his keynote address, Anderson spoke about the current challenges people are being faced with as a result of a “triple revolution taking place in the world today.”

Second, people are challenged to eradicate the last vestige of racial injustice from the nation.

“I must say this evening, that racial injustice is still the black man’s burden and the white man’s shame,” Anderson said. “It is an unhappy truth that racism is a way of life for the vast majority of white Americans, spoken and unspoken, acknowledged and denied.”

He said he can see nothing more urgent than for Americans to work passionately and unrelentingly to get rid of racism.

Poverty was another one of the challenges highlighted by Anderson.

To keep King’s legacy alive, Anderson challenged those who attended Thursday’s ceremony to keep fighting for justice, equal and better pay, health care and safety for all people.

Anderson was joined on the program’s lineup by the Young Gifted and Blessed Gospel Choir and other Francis Marion University student performers.

Les Echols, director of community and minority enterprise for the Greater Florence Chamber of Commerce, gave closing remarks at the celebration.

“We talked about the dream and MLK wanting people to live the dream,” Echols said. “And before I leave here, I’m going to drop off, on behalf of the sponsors and the greater Florence Chamber of Commerce, a check for $1,000 for the Francis Marion University Education Foundation annual fund so that someone else, some lucky men and women, can also be able and privileged to live the dream.”