The Greater Florence Chamber of Commerce held a Business After Hours at SpringHill Suites by Marriott on Hospitality Blvd. on Thursday evening. The event was hosted by Raines Hospitality. Chamber members had the opportunity to network and socialize during the appointed hours. About 130 guests attended the event.

Entertainment was provided by the duo Prettier Than Matt.

It was Jackie Olsen and Shana Sullivan’s first time attending. They work with the Pee Dee Coalition and said they came for the networking opportunity.

The hotel opened in Florence in 2003. Its 95 rooms have recently undergone renovations. The rooms are about 25 percent larger than standard rooms.

Don and Robin Ashwood were visiting with House of Hope and attended the event with their friend Julie Maxham, director of donor development. Don won the prize for the evening.

Congratulations to the Florence Chamber and City of Florence’s Business of the Quarter, Clarke and Company, an employee benefits agency located in Downtown Florence.

Business of the Quarter is a unique partnership of the City of Florence and the Chamber to recognize local businesses for contributions to community development, growth and civic engagement. 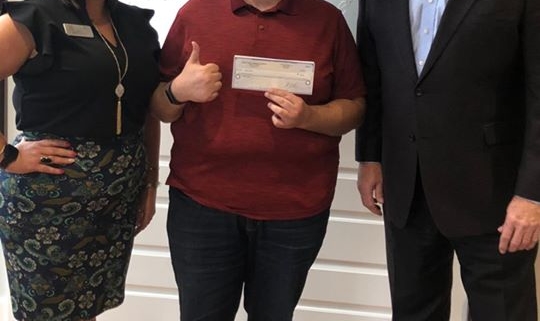 The Greater Florence Chamber of Commerce was honored to award Phillip Guyton,winner of the “Take A Shot” photo contest,a $100.00 check today. Phillip submitted captivating and lively photos that truly captured Florence. His photos will be showcased on the cover of the 2020-2021 Newcomer’s Guide that will be published in July 2020. Congratulations Phillip and thank you for your involvement.

We thank all of our participants and will be using their submissions throughout the Newcomer’s Guide.

The American Cancer Society celebrated joining the Greater Florence Chamber of Commerce on Monday at the chamber office.

The mission of the American Cancer Society is “to save lives, celebrate lives and lead the fight for a world without cancer.”

“Having cancer is hard,” Boateng said. “Finding help shouldn’t be.”

The American Cancer Society sponsors Relay for Life. The 26th Florence County Relay for Life will be from 1 to 10 p.m. on April 25 at Freedom Florence.

“Every survivor in Florence County is invited to participate,” Boateng said.

It is also for caregivers and family and friends. Everyone is welcome to join in the celebration, she said.

The Florence Relay was started in 1994. One of the originators was Kaye Floyd-Parris.

Boateng said she joined the chamber after discussing the benefits to the American Cancer Society with Jay Lavrinc, director of membership relations with the chamber.

She said the exposure in the community and getting information about the ACS out to chamber members will benefit them.

Boateng said she doesn’t have an advertising budget, and having that outreach will be beneficial to the organization.

“This will mean more folks to share the word,” she said.

Boateng doesn’t have an office in Florence. She works from her home at the beach.

Boateng started as a volunteer and team captain with Relay for Life. She said her mother, father and a sister died of cancer, and she has two brothers who are prostate cancer survivors.

When people asked her why she volunteered before becoming an ACS employee, she said, “The life I fight for could very well be my own.”

Herring has worked for ACS for 16 years.

“I think it is important to let folks know that we appreciate all the investment they has put into the American Cancer Society,” she said.

She works closely with the Hope Lodge in Charleston. She said it was the first one of its kind. There are now 33 across the country. These are places for cancer patients and family to stay free of charge while taking treatment.

She said it is completely free. The facility in Charleston has 18 rooms.

Eaddy said ACS needs volunteers, especially with the Road to Recovery program. Through this program the ACS provides free rides to cancer treatments.

“This is one of the biggest requests when people reach out to the American Cancer Society,” she said.

There is some good news about cancer.

She said it is due to the investment of the communities and their support.

Every month except August and December, Boateng said, brings awareness to a specific cancer. There is a “colors of cancer” calendar with some months bringing awareness to more than one type of cancer. She said most people are aware of the “pink” for breast cancer awareness, but there are others that receive less exposure but are no less important.

Through their membership in the chamber of commerce, Boateng hopes to make more people aware of cancer. She said so many lives can be saved through early detection and screenings.

To read the full story on SC Now, click here.