Ladies on a Mission joined the Greater Florence Chamber of Commerce and celebrated with a ribbon cutting on Wednesday, November 17th. The ribbon cutting was held in the James Allen Plaza behind the Chamber office. Robin Sanders, Executive Director of Ladies on a Mission, and her group of volunteers were joined by Chamber staff and ambassadors. Sanders started the organization a year ago this week. Her mission is to feed the homeless from her hometown of Mullins to Florence, where she now lives. “By next year this time I hope to have a shelter open in Florence for the homeless,” Sanders said. “I have to thank my ladies. I could not do this without them,” she said. “I see a lot of homeless people,” She said a lot of them need food. Sanders said she started with a Big Wheel. People could spin the wheel and receive groceries such as canned goods, she said. Sanders said she is trying to get funding for her project but it has been slow going. A lot of the money to purchase food for the homeless comes out of their own pockets, Sanders said. She has 13 volunteers helping her.

Winning America held a ribbon cutting on Tuesday, November 16th in the James Allen Plaza on Dargan Street, hosted by the Greater Florence Chamber of Commerce, to celebrate its membership in the Chamber. Chamber staff and ambassadors joined Bob Skelton in the celebration. Skelton cut the ribbon with his wife, Sue, by his side. The mission statement of the Winning America project is “to create a pathway for change as to how we see, treat and value others.” Skelton said this is accomplished by encouragement, building up and uniting. Skelton is based out of his home in Florence. For this project, Skelton sets up video screens with positive messages of encouragement and encouraging others to be encouragers. He said the screens are placed in gyms and other places where people will see them. Skelton said he would like to see them placed in city buildings and has spoken with the mayor.  There were 10,000 more people dying on purpose than by accident in 2020,” Skelton said.  Skelton said he decided to be an encourager, because at one time he was on the brink of suicide. He said he had checked into a hotel in Columbia for the purpose of committing suicide. Skelton said it was his wife’s encouragement that kept him from doing it. That is when he learned the power of encouragement, he said. 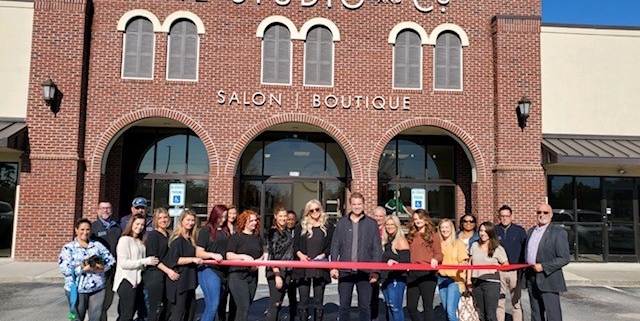 The Studio, A Salon, located at 1381 Celebration Blvd. in Florence, has rebranded and expanded to a new location. To celebrate the move to 2515 S. Cashua Drive in the Shoppes at Celebration shopping center and the change to The Studio & Co. Salon and Boutique, a ribbon cutting was held with the Greater Florence Chamber of Commerce on Monday, November 15th. Owners Doug and Tara Smith were joined by Chamber staff and ambassadors for the celebration. “This is something that makes sense to our business model,” Doug Smith said. “One of our core values is ‘own the guest experience,’ and providing a full women’s boutique complements what we do on a daily basis – making our guests feel great.” He added, “We outgrew the space we were in.” The Studio and Co. Salon and Boutique has five full-time stylists, four associates in a training program and four front-desk employees. Tara Smith said the associates are receiving training that would go along with a master’s course. 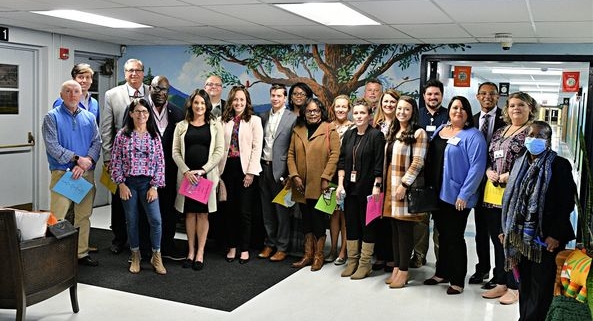 The Fellows in Education Class of 2021-2022 held their monthly gathering on Tuesday, November 9th  at Briggs Elementary School. Participants were greeted by students playing violins in concert outside while lunch was served. Later, principal Tara Newton and her staff shared many of the school’s classroom activities and future student enrichment plans.  Florence 1 Schools Farm to School Coordinator Jeff Murrie explained the goals of the farm program which are to increase SC grown fruits and vegetables in all schools, promote healthy eating habits while providing nutrition and agriculture education.  The class also helped celebrate Briggs Elementary School recently being chosen as a 2021 Blue Ribbon School of Excellence, Lighthouse Schools.  The Fellows program is designed to give local leaders a unique, behind-the-scenes look into several schools within Florence 1 School system. It is partnership program managed by Florence 1 Schools, The School Foundation and the Greater Florence Chamber of Commerce.

To see the photos from the day, click here.

The Montessori School of Florence held a ribbon cutting on Tuesday, November 9th celebrating joining the Greater Florence Chamber of Commerce. Joining in the celebration were members of the school board, Chamber staff and ambassadors.  The Montessori School of Florence was established in 1976. It moved into its present location at 510 W. Palmetto St. in 1999, said Elizabeth Kahn, Director.  Kahn said it is the only totally Montessori school in Florence.  About 140 students attend the school in grades 2K through six. There are 17 teachers and assistants at the school. Kahn has been director since July.

Crawford Capital Investments, investing in homes, families and communities, held a ribbon cutting in the James Allen Plaza behind the Greater Florence Chamber of Commerce on Thursday, November 4th celebrating its membership in the Chamber.  Cutting the ribbon was owner Gia Crawford. She was surrounded by her husband, Kendric Crawford, Co-Owner; their two children; his father, Daryl Crowner of Marion; Brooke Laughridge, Team Member; and Chamber staff and ambassadors.  Crawford Capital Investments primarily invests in real estate, said Gia Crawford. She said they invest in homes and neighborhood revitalization.  The Crawfords have been in business about a year and work out of their home. They are both graduates of Francis Marion University. Gia is a native of Charleston, and Kendric is a native of Marion. They moved back to the area from Virginia to transition into the Florence market with a goal of making a difference in the community.

The Florence Rotary Club cut the ribbon and joined the Chamber at the beginning of its meeting Monday, November 8th at Victors. Club members were joined by Chamber staff and ambassadors at the event.  The club, established in February 1920, and celebrated its centennial February 2020, said Ashley Christenbury, Club President.  Major projects undertaken by the club include the Beauty Trail in Florence, Christmas Shopping project, Christmas bell ringing for the Salvation Army, Forget Me Not 5K, Dictionary Project, RIDDE, and the donation of $10,000 plus to local community non-profits each year.  The club has 129 active and honorary members.

Christina O’Malley, MUSC Health Florence Division Director of Development and Senior Manager, has won two awards.  The hospital announced Tuesday, November 2nd that O’Malley had received a community service award from the Marion County Branch of the NAACP and certificate of special appreciation from the South Carolina Woman to Woman Conference.  O’Malley said she was honored to receive the awards and added that MUSC Health is deeply committed to partner with its communities to eliminate disparities and improve access to health care.  The NAACP award was given to O’Malley for her inspiration to the people of Florence and Marion counties and for being a “truly professional, caring community leader.”  Marion County Branch President Marvin Hemingway said it was a pleasure to honor O’Malley.

Florence-Darlington Technical College recently received $3 million in grant funding from the U.S. Department of Education to launch the Pathways to a Brighter Future Program.  The new grant-funded program will build on previous programs to improve the college’s capacity to expand services to address the needs of minority and underserved student populations.  The Pathways to a Brighter Future Program will work with other school programs — such as Upward Bound and the Dual Enrollment Program — to serve high school students to identify and recruit Pathways students.  It will also focus on helping students’ complete credentials in STEM and healthcare programs. Intensive tutoring, counseling, advising, mentoring, targeted workshops and other student and academic services will be provided as well.