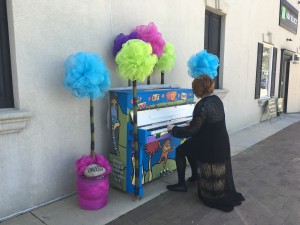 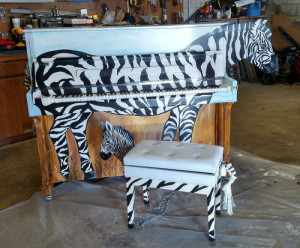 Play Me I’m Your Florence 2016 announced that Janis Hobbs and Ellen Walker were the recipients of the Most Creative Piano award and that Charlotte Driggers and her East Clarendon Middle School art students were the recipients of the People’s Choice award at the Florence Regional Arts Alliance’s arts awards ceremony Tuesday night. The Willcox, Buyck & Williams Foundation presented Play Me I’m Yours for the second year in April as part of its history and culture participation program. 27 street pianos decorated by local arts were located in parks, squares, and other public spaces for anyone to play and enjoy. Touring internationally since 2008, Play Me I’m Yours is an artwork by British artist Luke Jerram more than 1500 pianos have now been installed in over 50 cities across the globe, reaching more than 8 million people around the world.
The award for the Most Creative Piano was determined by an artist of international repute who noted that Hobbs and Walker “reached a bit farther, taking a risk in how they extended the work itself beyond the piano.” The judge found the piano’s “use of color sensitive and expressive. That piano was transformed, not merely decorated.” In presenting the People’s Choice award, Reynolds Williams noted that Driggers and her students expressed whimsy in their “free flowing, relaxed depiction that invited all to play… (he) particularly enjoyed the captured creature inside the keyboard cover, inviting his rescue by song.”
Williams emphasized the contributions of all the artists, musicians, sponsors, and volunteers for Florence’s signature outdoor art event. He reported that “This year’s participation almost doubled from last year’s, to over 75,000 residents, visitors, and virtual visitors. It is achieving our goal of creating and binding the whole community through talented, creative, people.”
The Founding Sponsors for this project are The Willcox, Buyck & Williams Foundation, King Cadillac Buick GMC, Hotel Florence and Victor’s, Duke Energy Progress, and Drs. Bruce & Lee Foundation. This project is made possible through funding from the Florence Regional Arts Alliance’s Quarterly Grants Program, which is funded in part by a generous award from Honda of South Carolina, the South Carolina Arts Commission and the John and Susan Bennett Memorial Arts Fund of the Coastal Community Foundation of SC.
(Information and pictures courtesy: Roger Malfatti/ Project Manager, Play Me I’m Yours Florence, SC)
https://www.flochamber.com/wp-content/uploads/2016/05/248-4.18.16.jpg 3024 4032 Mandy Howle /wp-content/uploads/2015/11/Web-redesign-300x121.png Mandy Howle2016-05-10 19:00:472016-05-10 16:07:11'Play Me I’m Yours' Celebrates, Awards Artists
Followon TwitterSubscribeto RSS Feed