Blog
You are here: Home / Blog / Frontpage Article / Florence’s ACS has software clients around the world 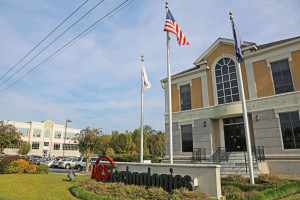 “FLORENCE, S.C. – When Marvin Owen returned to his hometown in 1983 to work as a programmer for what was then known as Computer Dimensions, the burgeoning software company had six employees and 60 clients.

Today, ACS Technologies employs 390 people – 270 in Florence – and has 50,000 clients all over the country. Globally, it has clients in 16 countries across Europe and Asia and has 250 clients in Canada that use software for churches designed, tested and produced on the company’s Dunbarton Drive campus.

“We put Florence on the map as far as the church world,” said Owen, the company’s 61-year-old president. “It’s kind of unique for a small town like this.”

Owen earned a computer science degree at Furman University and recalls using an IBM 1130 computer that was only available to students after 10 p.m. when the school was done for the day. Solving math problems and playing chess matches on the keypunch computer stoked his desire to learn more and helped him decide on a career in programming. He also saw the need to gird his technical know-how with a structured sense of the business world and earned an MBA at Wake Forest University.

After grad school he found working for a multi-faceted consulting firm out of Charlotte to be less than ideal. It was very high pressure, he said, and overly aggressive. While he did have several solid years of learning various computer systems and how they interfaced with hospitals, he decided he wanted to change jobs and started looking at what might be open back in the Pee Dee.

“I thought, let me check my hometown,” he said. “I saw Computer Dimensions and called at the right time. They wanted someone to run the programming side … they were just getting started.”

Founded by Harris Rogers, Tom Rogers, Billy Campbell, and the Rev. Iverson Graham, the tech start-up looked at a church’s database and the bookkeeping side of things to develop what was known as an automated church system, which soon became the name – ACS. It struggled at times, but Owen said the founders believed in the company and provided key financial backing in lean times.

“By the mid-’80s it was financially stable and it kept growing,” Owen said. “For the longest time it was organic growth, selling to churches.”

A series of acquisitions in the 1990s expanded the company’s brand recognition and reach with offices in Arizona, Washington state and a regional hub in Greenville with 10 programmers.

“Our original mission was to provide software for churches, pastors and the computer person – that’s still the mission today,” he said.

There are some schools that ACS Technologies count as clients, but 95 percent of its customer base is churches.

With service to 70 different denominations, ACS is known now as a leading provider able to provide constant support as the robust marketing and sales arms works to explain the newest cloud-based product, Realm.

“It’s another great growth opportunity – moving to the cloud. “With our new product, 4,000 churches are using it and we’re getting more market share.”

Read more of this article here: