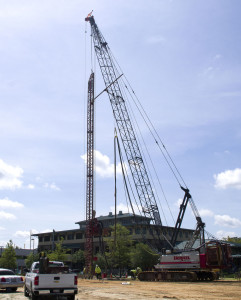 The project will take between a year and 16 months to complete, depending on weather conditions. A grand opening is expected sometime in 2018.

“They’re starting to do test driving for the piles and some piling work, but right now they’re at the very beginning of the process,” said Florence City Manager Drew Griffin. “We’re very excited that’s it’s moving along.”

Griffin said there won’t be any road closings downtown during the hotel’s construction.

The hotel is being developed by SpringBridge Development and will be managed by Raines Hospitality, a locally owned group that manages several hotels throughout Florence.

“One of the conditions we put into play with the Hyatt was that we didn’t want to completely block any of the roads,” Griffin said. “Traffic may go to one lane for a short period of time, but there should never be a total closure.”

The new hotel is expected to create 30 jobs by the time it opens in the first quarter of 2018. It will feature around-the-clock food service, a bar and an outdoor pool as well as 1,250 square feet of meeting space with an outdoor terrace.

The project was announced more than a year ago, though it was known under code name “Project Tulip” months before it was publicly revealed.

Business After Hours with Raldex Hospitality