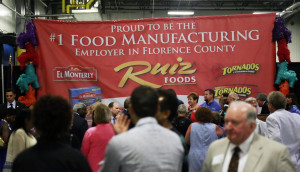 FLORENCE, S.C. – Ruiz Foods executives announced the details of a $79 million plant expansion on Tuesday morning during a “fiesta” at their Florence facility at 2557 Florence Harllee Blvd.

The expansion will include the addition of three production lines as well as added warehouse and office space. The construction of the production lines will double the facility’s current capacity and add 705 jobs over the next seven years, according to Ruiz Foods President and CEO Rachel Cullen.

Cullen said Ruiz Foods plans to break ground on the expansion this fall.

“As our products continue to gain popularity, we need additional capacity, which means more jobs,” Cullen said. “We are here to grow and be successful. We’re here to announce today that we’re not done.”

The expansion announcement comes three years almost to the day that Ruiz Foods held its grand opening in Florence on July 15, 2014. The company moved to Florence after acquiring the former H.J. Heinz facility and currently employs more than 500 people.

Keith White, maintenance manager at Ruiz Foods, worked for Heinz when Ruiz Foods bought the site and was one of the first people to be employed at the new plant. White said he is surprised how quickly the company has grown, and he is happy to be a part of the Ruiz Foods team.

“To go from being here by myself to now we’re over 500 people and we’re going to go to over 1,200 people. It’s pretty amazing,” White said. “I didn’t expect it to happen this fast.”

Beck is a member of the third generation of the Ruiz Foods family who talked about the company’s humble beginnings in 1964. Ruiz Foods was founded by Beck’s father and grandfather. They produced 40 pounds of food each day out of their home. Now, the company employees more than 3,600 people in three states and can produce 40 pounds of food in six seconds.

Beck grew emotional as she acknowledged her father, Fred Ruiz, during the expansion celebration, saying she feels immense pride when she reflects on all the company has accomplished and the decision to build a plant in Florence.

“We’re extremely proud of our team,” Beck said. “It is just such a pleasure to be a part of such an enthusiastic, welcoming and hard-working community. We are forever grateful.”

“This just validates everything that we strive to do,” Ruiz said. “And Kim is keeping it going. It just warms my heart. It doesn’t get any better than that from a dad’s perspective.”

El Monterey is the flagship frozen Mexican food brand for Ruiz Foods and the top-selling brand of frozen Mexican food in the nation. Tornados, also distributed nationally, is the company’s snack brand and a leader on convenience store roller grills.

While producing Mexican cuisine, Ruiz Foods also concentrates on public service and contributing to surrounding communities. In the Florence area, programs such as Ruiz 4 Kids and Ruiz Cares allow the company to support local residents. During its expansion celebration, Beck and Ruiz Foods announced the donation of $100,000 to McLeod Regional Medical Center to benefit its child life center.