Blog
You are here: Home / Blog / Frontpage Article / An electricity provider is gearing up to invest at least $22 million in... 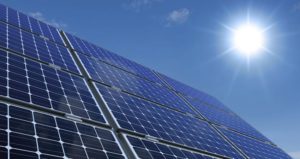 An electricity provider is gearing up to invest at least $22 million in solar energy to meet electric needs in Florence County.

According to county documents, the company is considering 17 different projects that include conversion of solar electricity at a site in Florence County. A tax agreement was introduced by Florence County Council on Thursday for the group of investments, collectively known as “Project Fig.”

Sources familiar with the project told the Morning News the company behind this project is Duke Energy. Officials with Duke Energy declined to comment on the project.

The county’s resolution lists nine of the projects included in Project Fig, all under code name. Each of these projects holds an investment on no less than $2.5 million, according to the document.

The council unanimously finalized a measure that will refinance debt on an existing facility and use that refinanced bond to build a parking garage adjacent to the county complex on Irby Street.

According to county documents, the bond amount may ultimately be less than $12 million “depending if and how much of” penny sales tax dollars are used – but will not surpass $15 million.

Officials said construction on a parking facility could begin in the early months of 2018.

Sonoco partners with Clemson on packaging initiative
Scroll to top